Whatever it takes – farewell Super Mario 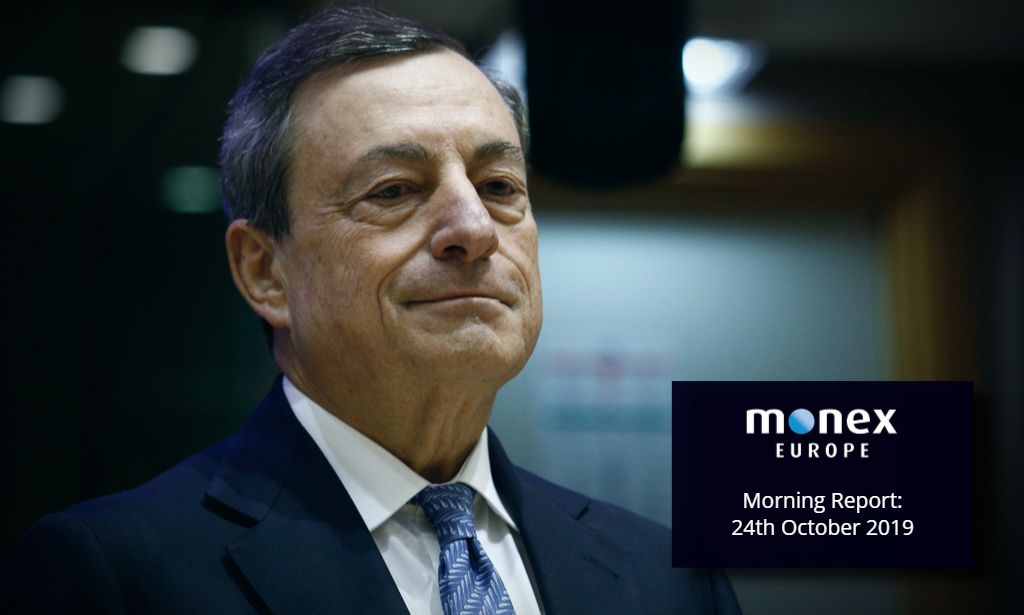 Sterling stemmed its losses from Tuesday’s dramatic failure by the Government to ensure Boris Johnson’s Brexit deal will be passed this month and even began to advance again yesterday. With no prospect of Boris’s current deal clearing Parliament in time for next week’s October 31st deadline, attention now turns to if the EU will grant an extension as requested by the Government over the weekend under the terms of the Benn Act. The timing of the general election that will probably be called is now the other main focus for UK politics and sterling, with the Times reporting that Johnson will make a third attempt to trigger an election under the Fixed Term Parliament Act today. Buzzfeed is reporting this morning that the Johnson cabinet is divided over whether the Government should focus on passing legislation related to Boris’s deal, or pushing for a general election, with the former more likely to bring immediate sterling strength if successful.

ECB President Mario Draghi takes to the stage for the last time this afternoon before handing over the keys to the office to former IMF chief Christine Lagarde. Markets are expecting no policy change from Draghi following September’s dramatic decision to cut rates deeper into negative territory with a tiering system introduced, restart the Asset Purchasing Program, and call for more expansive fiscal policies. Many believe we have seen the fireworks from Draghi back in September, with today’s press conference more likely to be a recap of his eight-year tenure. The most interesting aspect of the meeting is likely to be any comments or questions relating to internal ECB opposition to further quantitative easing, as this will continue into Christine Lagarde’s tenure and may constrain the Bank’s ability to ease policy in response to future shocks. The euro is over a percentage point higher compared to where it began the day’s trading session for the last ECB meeting on September 12th. Prior to the ECB announcement at 12:00 BST the market will see a bombardment of preliminary Eurozone PMIs. The main focus this morning will be on Germany’s manufacturing and composite PMI at 08:30 BST, following September’s release all but confirming the Eurozone’s largest economy slipped into a technical recession, along with the Eurozone composite at 0900.

The greenback bowed to an improvement in risk sentiment yesterday, declining with havens as the market looked towards the next risk-barometer; whether the EU officials will decide on another Brexit extension. The US dollar tracked lower against riskier G10 currencies such as the euro, sterling and New Zealand dollar. The loonie also rallied on the back of higher oil prices, forcing the DXY to touch session lows in late New York trading, but the greenback bounced back and ultimately closed marginally lower on the day. Other US news revolved around the New York Fed’s announcement of an increase in the amount it will offer in the overnight repo market to ease dollar liquidity shortages in the banking sector as month-end approached. The NY Fed will increase its overnight liquidity injections to $120bn, while also increasing the 2-week offering. US politics took another turn towards partisan deadlock after a group of Republican lawmakers – accompanied by media – stormed a closed hearing related to the ongoing scandal surrounding President Trump’s attempts to influence Ukraine to attack his domestic political opponents.

The EIA reported a fall in US crude inventories by 1.7m barrels, pushing WTI crude prices higher to $55. The surge in oil prices helped the loonie touch a 3-month high but has begun to pare its gains in this morning’s session. In politics, Liberal party leader Justin Trudeau announced that he will not be seeking a coalition partner after his majority in Parliament was lost in Monday’s election, instead, Trudeau opted to govern on a case-by-case basis. The returning PM pledged to begin the process of implementing his campaign pledges once Parliament reconvenes, beginning with an increase in the basic personal tax-free income limit.