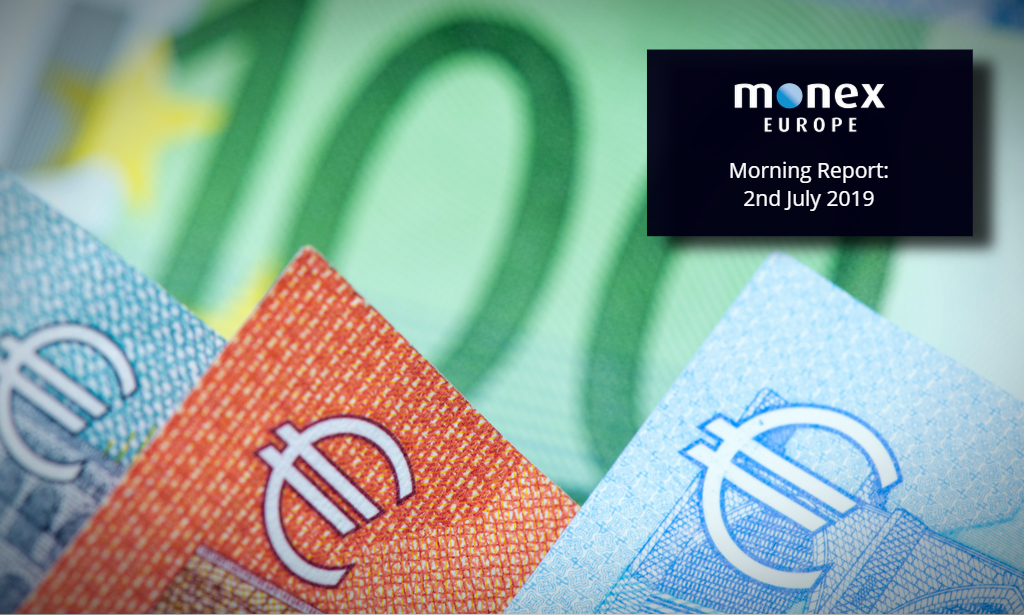 Sterling traded lower against the US dollar yesterday, gaining ground against the euro only when the single currency had its own bout of weakness against the greenback overnight. Yesterday’s Markit Manufacturing PMI for June was dreadful, falling to a 76 month low of 48.0. Employment in the sector contracted, and as expected Brexit, weak export demand, and stockpiling were the main drivers. A few months of dismal manufacturing data don’t entail a further slowdown of the UK economy, and divergence between manufacturing and services data is a common theme across the region, but the depth of the miss nonetheless means that hard output data and later surveys will be worth watching closely.

The single currency got caught in the maelstrom of negativity that flowed from manufacturing survey data, which throughout the day eventually dragged EUR down towards the bottom of the G10 ranks. The Markit Final Manufacturing Purchasing Manager Index figure came in slightly below expectations at 47.6, below the neutral level of 50. What will have really spooked investors, however, is not just the low headline score, but likely the dismal details. June marked the ninth consecutive month in which new orders fell to a lower level, which led companies to cut into work backlogs for the tenth month in a row. This then contributed to declining manufacturing employment in Spain, Italy and Germany, with only France being the sole positive exception of the major European countries with a minor jobs increase. Lead times have been decreasing every month since March, showing that demand really is less than lacklustre for basically anything but consumer goods. This weak demand and destocking have already led Markit economists to conclude deflationary pressures are strongly rising. They observe “more discounting” almost everywhere, with price gauges dropping to the lowest level in around three years. The headline PMI score is at its lowest level since the opening months of 2013 with a reading that points to a fall of around 0.7% of manufacturing output in Q2. Together with swiftly waning inflation pressures, this indeed justifies further monetary easing by the European Central Bank, which confirms markets in their assessment there is currently a 76% chance of an ECB rate cut in September. Today the heated debates on who will get the European Union top jobs for the coming years will continue, which has also pushed back discussions Italy’s potential entering of an Excessive Deficit Procedure to at least Wednesday. Overnight, the US Treasury Report suggested Washington may add $4bn to a pre-existing list of $21bn worth of tariffs in response to the uncompetitive subsidies the EU gives Airbus. A public hearing of the proposed $4bn worth of products will be held on August 5th.

The US dollar climbed 0.6% yesterday as fears of a breakdown in US negotiations with China looked overbaked. The greenback took most of its gains out of the Swiss franc, the Australian and Kiwi dollars and the single currency. The US yield curve also took a step higher as, without a breakdown in negotiations which would have prompted further tariffs, it is believed the Fed would not have to cut rates as extensively as before. The one-month Treasury yield spiked the most, rallying 4 basis points yesterday compared to Friday’s close, whereas the two-year yield rose 3.225 basis points and the ten-year rose 1.972 basis points. Yesterday’s data release was the ISM manufacturing index which continued to follow the trend of deteriorating soft data in the US. The index fell from 52.1 to 51.7 but outstripped expectations of a reading of 51.0 to help the dollar continue its rally. Beneath the surface, however, things are not as good as they seem with new orders dipping to 50.0, the lowest since December 2015, and the index reaching lows not seen since 2016. On the flip side, there was some saving grace in production and employment sub-indices which rose by 2.8 and 0.8 points respectively. Today, the data calendar remains light but eyes will be on tensions between the US and the EU as US-China trade talks resume.

Yesterday’s loonie sell-off didn’t last for long as USDCAD dips back down 0.15% this morning. Monday’s move was a by-product of the greenback’s surge following the G20 meeting as many Canadians enjoyed a bank holiday. The loonie faired the best against the US dollar yesterday with oil prices climbing after OPEC+ agreed to extend its output cut quotas into 2020. Today, developments in oil markets will be key as OPEC wrap up their two-day meeting in Vienna, while June’s manufacturing PMI is scheduled for 14:30 BST. After falling for 7 consecutive months to sit at 49.1 last month, the BoC will be keeping a close eye on a rebound in the manufacturing sector today.