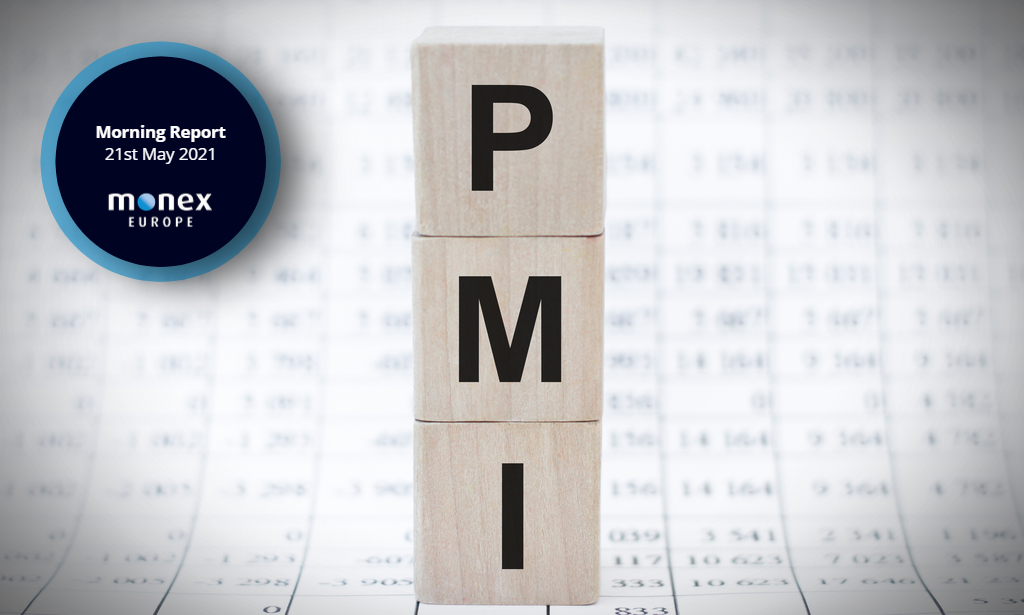 Sterling has struggled to hold onto this morning’s earlier gains against the dollar as the risk environment sours again in markets. Despite a minor rally on the back of strong retail sales data, the pound now finds itself sitting 0.1% lower against the greenback. The muted price action in GBPUSD is notable this morning given the retail sales data came in more than double expectations to show volumes grow by 9.2% MoM in April as lockdown restrictions eased and in-store shopping recommenced. Consumption was highest in non-food stores after spending was largely concentrated in staples throughout lockdown periods, while consumption also switched from online to in-store given the easing of restrictions on the services sector on April 12th. Sterling didn’t react too strongly to the positive data, largely because a surge in consumption was to be expected once lockdown measures eased and because more timely data such as the BoE CHAPS data, which shows weekly aggregate credit and debit card spending, confirmed the rebound in consumption in delayable spending. Looking ahead, this morning’s preliminary PMI data for May at 09:30 BST could come to the rescue for the pound, with the services PMI expected to rise from 61.0 to 62.2 as restrictions were eased again in May.

Yesterday’s price action saw the euro recover against the US dollar from Wednesday’s FOMC minutes release, while this morning, the rally was extended ahead of the eurozone Purchasing Managers’ Index figures from April. A strong reading will likely provide EURUSD with a modest boost, although the pair is trading around February highs already and may find resistance further up, unless it is paired with additional economic headlines or data that point to a strong euro area recovery. For now, the euro is still riding high on vaccine optimism as the vaccination roll-out picked up pace, along with reopening plans throughout the bloc. For the southern European countries, a further relaxation of measures ahead of the summer period is crucial for growth as these countries rely on summer tourism for not only the recovery but also their overall growth levels going forward. Beyond the PMI release this morning, markets will focus on the speech by European Central Bank President Christine Lagarde at 12:00 BST, where she is unlikely to deviate much from recent communications ahead of the crucial June 10 meeting.

The greenback soon lost its shine in yesterday’s session after its initial buoyancy post-FOMC meeting minutes failed to hold. While the currency paired back gains across the G10 currency board yesterday, the greenback has stabilised somewhat today. Overall, the market remains skeptical that the latest FOMC minutes translate into any meaningful change in the current narrative. There is a level of discomfort in market pricing at present, represented by the DXY index over the past 3 trading sessions. The broad dollar index has declined, only to rally by a similar magnitude, only to decline again. Yesterday’s 10-year TIPS auction further confirmed that the FOMC minutes did little to change market expectations of policy normalisation when demand drew weaker than expected, with the yield of the $13bn sale printing at -0.805%, 2bps above its yield prior to the trading. Meanwhile, the 10-year breakeven inflation rate fell to fresh lows under 2.45%. With policy expectations anchored for now, markets will continue to watch comments by Federal Reserve speakers to assess the central bank’s reaction function and capture hints of any QE taper talk. Today at 17:15 BST, Federal Reserve’s Kaplan, Bostic and Barkin may ignite some dollar volatility at the final trading day of the week, just before Fed’s Daly’s speech on wage dynamics at 18:30 BST.

The Canadian dollar completely reversed Wednesday’s losses in yesterday’s session despite oil markets taking another leg lower towards the $60 per barrel mark. The loonie started to retrace ground against the dollar prior to the Bank of Canada’s annual Financial System Review as the greenback broadly declined after a stellar session on Wednesday. With momentum already on the Canadian dollar’s side, the Bank of Canada announced that the level of leverage within the housing market remained a concern. Speaking after the report, BoC Governor Tiff Macklem stated that “counting on ever higher house prices to build home equity that can be used to refinance mortgages in the future is a bad idea”. Macklem’s comments come after house prices climbed more than 30% in many markets in Canada over the past year, which is causing speculation to drive even more volatile price developments. The government soon enacted suggestions by the central bank to tighten up mortgages amid the speculative developments. Following on from a decision in April to raise the level of interest at which people qualify for mortgages that are uninsured by Canada’s housing agency, buys that are insured will have to show they can afford a minimum rate of 5.25%. Currently, the threshold posted by Canada’s six largest lenders is 4.79%. The move, as suggested by the Bank of Canada, should take some of the edge off of speculation that Canada’s housing market could prompt earlier rate hikes by the BoC. Although regulations have tightened, many argue that they are a drop in the ocean to correct the problem, with the BoC instead signalling to markets that they’re sensitive to housing market developments. Today, the loonie retraces some 0.2% in the morning of the European session, with April’s retail sales data the sole data release at 13:30. With lockdown measures tightening in April, however, the print is expected to show consumption cooling from 4.8% MoM in March to 2.3%.