The Fed dusts off another 2008 liquidity tool 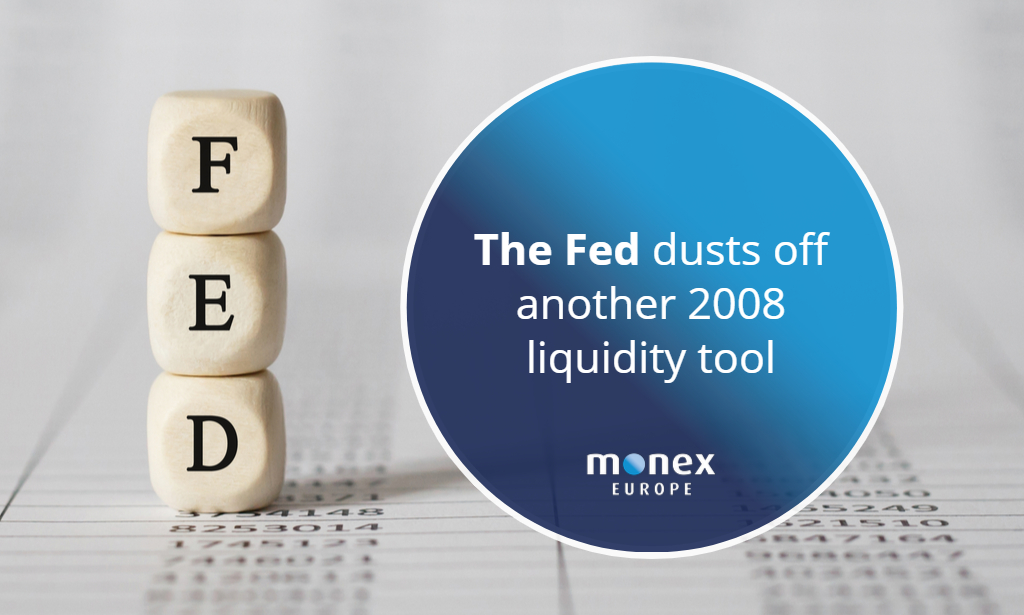 The Federal Reserve today said it has established a new Commercial Paper Funding Facility, similar to that used during the 2008 financial crisis, to try and appease further dollar funding stresses – this time in non-financial corporate debt markets.

This move comes after gaining the approval of the US Treasury secretary, as per the requirement of the 2010 Dodd-Frank Act, with the intention to further ease financial stresses which have caused money markets to explode in the hunt for dollar liquidity.

The Fed has aimlessly been prodding and poking the money market to diagnose what is causing the financial pain, resulting in a multitude of medicines being issued to try and ease dollar funding conditions. However, the impact is far from desirable at the moment with money markets still showing the signs of pain. Swap lines to key central banks have failed to stem cross-currency basis swaps from charging heightened premiums for dollar access, notably in exchange for euros and yen.

Although it must be noted that the European Central Bank and Swiss National Bank are yet to pass dollar liquidity onto regional banks with Open Market Operations which are scheduled to start tomorrow. That being said, the Bank of Japan did issue such operations today, which has had a limited impact on restoring pricing in swap markets thus far.

Elsewhere, markets were shaken by the largest spike in 3-month USD Libor since 2008 at a time when Fed repo operations remain undersubscribed. Additional strains appear in high yielding US bond markets, generalized collateral markets, and commercial paper markets. It is possible that sell-offs in equity and commodity markets were also exacerbated yesterday by the hunt for dollar liquidity and the aversion by investors to pay USD margins in such an environment where acquiring the greenback is increasingly costly.

The hunt for dollars is contagious, and the Fed is trying its utmost to stop this from becoming a significant strain that could potentially exacerbate the economic impacts of the virus. It initially aimed to fix such a liquidity squeeze by slashing rates to 0%, opening up swap lines and lowering the countercyclical capital buffer for banks and increasing its balance sheet.

With this having limited impacts, the central bank stepped up its liquidity provisions by offering $500bn in overnight repo, although the demand in such auctions has been muted despite the premium for dollar liquidity seen in other markets. Now it looks to the commercial paper route and lowering bank leverage rules as the search conditions to avoid a credit crunch increasing the economic damage from the spread of COVID-19.

We will just have to wait and see, but the Fed is soon running out of options to appease markets as they hunt for the true cause of the financial pain.

Uptake in repo auctions still remains minimal despite strains elsewhere, with another $500bn auction due in just under an hour, but the regularity of the auctions may flush liquidity through markets to bring down rates in LIBOR and swap markets – especially as primary dealers see conditions improve in other markets.

Currency markets may also find some relief by the ECB and SNB conducting OMO’s tomorrow, which could dull some of the dollar strength in spot FX markets. Finally, there is the commercial paper funding facility, which could purchase up to $1trn of commercial uncollateralized debt according to Treasury Secretary Mnuchin, backed by a $10bn obligation from the Treasury to protect the Fed from the credit risk of on such loans.

However, question marks on the pricing of this program remain. With the cost of such a loan sitting at OIS+200bp, a full 100bp than that seen in 2008, many are speculating the impact of such a program will be minimal, instead forcing large corporates into the discount window – a scheme regarded as the last resort by investors through the years.

However, with major banks recently accessing credit funds from this window in order to “destigmatize” its usage, this could well be the play by Chairman Powell. It will surely be a case of time will tell, especially with the market conditions we are seeing today, but a remedy is in urgent need and the Fed’s responsiveness highlights this as credit conditions are easing globally at a rapid rate.

Graph: JPY and EUR cross-basis swaps continue to price a high premium for USD liquidity although tail off from yesterday’s peaks